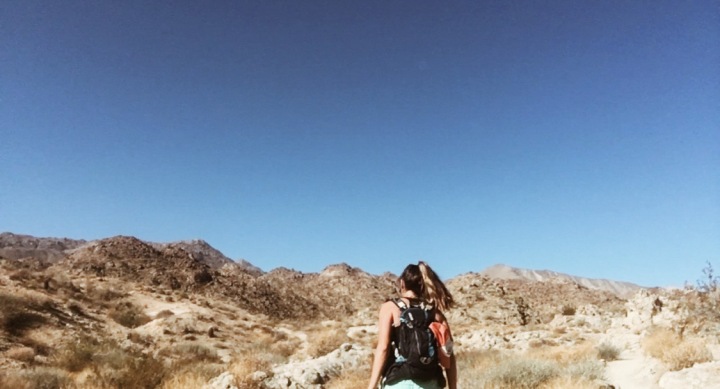 I have fears just like anyone else; losing loved ones, deep water, getting chased by bees, sharks while surfing, not growing as a person, heartbreak, letting students fail, and getting stabbed, to name a few.

But it wasn’t until I was 26 years old, walking alone in the desert, through a sand canyon, where I encountered fear head on, and really whole heartedly and open mindedly listened to it.

It wasn’t that I had never experienced fear in my life- it was just that I hadn’t ever really thought about the stages you go through as you navigate yourself from Point A (free of fear, to Point B (overcoming fear).

Fear can be a daunting emotion. It can last weeks, months, years- but it can also last milliseconds and then vanish. Whether it be your deepest fear such as losing loved ones- or simply the fear you experience when your brother jumps out at you in the hallway when the lights are off and you thought everyone was in bed- it all boils down to a singular feeling.

So, back to my desert story.

I took a long weekend, a solo trip, away from everyone and everything. On one particularly hot afternoon, I took off up a trail that looped around the high desert, for a total round about trip of 6.3 miles. A simple and doable distance for my afternoon adventure. When I was about 2 miles out from the trailhead, I still hadn’t encountered a single other human. As I looked around-I was feeling blissful- the desert landscape was desolate and shiny, beautiful and barren, freeing and… eerie.

I approached a beautiful sand bank, which arched above the ground- creating a desert canopy for you to walk through- almost like a cave. I wasn’t thinking about much prior to this landmark- the goal of my travels was to escape into a calm mind and present heart- and I felt that I was achieving this rapturous pursuit.

I felt alive and at peace out here- until I wasn’t.

Thanks to my constantly anxious mind, it suddenly dawned on me that this might be where I die. What a classic, “she was murdered while alone in the desert”, story. (As an avid outdoor enthusiast, it is ridiculous how often I let my mind wander to these far less than likely conclusions).

It wasn’t until I entered this sand cave that I realized how quiet it was out here. All I heard was the crunching of my hiking boots against the sand below. I loved that sound, usually, but it became oddly overbearing- as if I was waiting to hear footsteps from another behind me. My heartbeat sped up and my senses became on hyper alert. Would it be a mountain lion? Did they have those in the high desert? Would it be some sort of desert serial killer, waiting to prey on stupid young women who dare to hike alone?

I knew I was being mostly ridiculous, but there was that gut feeling of uncertainty, the feeling that makes you pause, as your hair starts to stand on its edge: ah, fear, an old friend.

So I had a few options. If I truly felt like I was being watched or followed, shouldn’t I trust that instinct and turn around? But wasn’t I also just being paranoid? This was a semi popular hiking trail, it was just a coincidence that today I hadn’t crosses paths with anyone- or thing- yet.

I started to address the feeling. I was fearful, I was scared, I was letting my anxious mind spiral into all the horrible things that, although less than .001% likely, “could happen”.

I looked down at my feet. “I trust you”, I told them- as if the knots in my purple hiking laces could keep me safe. My eyes traced the sand walls. I took a deep breath and kept placing one foot in front of the other- my ears twitching at every sound that didn’t come from my feet below.

I knew I wanted to make it up to the top of the pass I was walking towards- it should only be another mile or so, which is where I would have a beautiful view of the valley.

So the question was- do I give in to the fear and take the “safe” option, turn around, and beeline it back to civilization? Or do I see what my body is capable of, not just the physical strength of each step- but the vulnerability it would take to keep moving forward- regardless of where my thoughts took me?

Maybe this isn’t the correct way to step into fear, but I decided to keep moving forward because if this was how I was supposed to die- so be it. I thought of myself as a desert girl version Chris McCandless. Allowing myself to be overcome by the beauty of nature and solitude- at whatever the cost.

“One foot in front of the other. Notice the texture of the sand below. Let the warm air fill up your lungs. Feel the sweat on your back cling to your backpack straps.” Repetitive thoughts I kept cycling in my mind.

In essence, the more I stepped into my fear- the more I knew I had to succumb to being mindful.

In these long minutes, I felt grateful to have the opportunity to practice what I do on my yoga mat, and apply it to this 97 degree day.

As I walked another 200 yards, I could see the ending slope of the sand walls- I decided I had to make it to that point and if I still wanted to turn around, once I saw what was on the other side, I would.

But I had to make it there first.

As I took those next 100 or so steps, I tried to notice what true fear felt like. What was my body experiencing- for if I were to make it through unscathed- could I take this new found awareness of such a difficult emotion and apply this process to other areas of my life in which I feel fear?

It was my shallow breathing that I first took note of. “Okay”, I thought. “Breathe deeper- one breath at a time.” I allowed the expansion of my lungs to be my first focal point as I moved through fear.

Next, I took into account the tension my muscles seemed to be grasping on to- particularly in my shoulders, neck, tongue,  and hands. “Relax”- easier said than done, but little by little, my shoulders softened below my ears, my tongue let go of its grasp to the roof of my mouth, my hands unclenched from their grip holding on to the straps of my backpack, and with this new found relaxation, it allowed my senses to feel more awake.

I didn’t dare look behind me, but I couldn’t help but start to feel euphoria. Here I was- alone in the desert, walking through a landmark in which I have no name for- other than maybe a sand cave- where I originally was struck by intense fear of “what if I get attacked”- yet now I was moments away from getting to my point B.

All it took was movement forward.

I laughed to myself as I rounded the bend and took in the beautiful emptiness of earth around me. The trail ahead of me worked up the mountain in switchback patterns- but there were no more sand caves, just open space for me to breath easily in. I took in the beauty around me- but also marveled at the strength within me. I had overcome, although maybe miniscule to other fears I have experienced, a fear.

What mattered was that I consciously worked through my fear. I let myself experience it in its entirety. I noticed the stages with each step forward. I felt fear to the core, I accepted it, I let it marinade in my body and my thoughts, and that is when I was able to move through it.

And what was I left with? As I made it to the top of the pass, where the trail would start to loop back down the mountain, I paused and looked out. I still had not seen anyone, my view was uninterrupted, thanks to the hot blue bird day. My chest felt expansive as I audibly giggled and smiled to myself.

Minutes earlier, I wanted to turn around, stop, retreat.

But instead, I persisted, worked through discomfort, and now was rewarded with an incredible view of this small slice of earth.

As I hope most of us know by now, our human instincts do not decipher the different modalities of that which fear comes in. Our sympathetic nervous system may detect a threat- and whether it be your brother in a hallway, or a mountain lion in the wild, it will often react the same- sending you into fight or flight.

So here is what I task you with: The next time you realize you are afraid- give yourself permission to sit in it- for it is my belief, that that is how you will be able to walk through it.

Approach fear, step into it, feel it thoroughly, and walk with it- for it will eventually be left behind and you will have an incredible view.

For anyone else feeling like rock bottom has somehow become home,
“I accept my emotions and let them serve their purpose.”
a memoir ⭐️
Feeling lucky to call this place home.
I cling to the notion,
Friday thoughts.